Miss U Catriona Gray’s advice to young girls: ‘You will find people who will believe in you’

One balmy afternoon somewhat at the tail end of the polar vortex, Miss Universe 2018 Catriona Gray came to the Philippine Consulate for a meet-and-greet with the Filipino community.

“Hello po, magandang hapon” she greeted everyone, this tall beauty with the grace of royalty. She was wearing white pencil pants matched with Filipiniana top, ruffled and embroidered. She was – if words could adequately describe — resplendent, beautiful, charming and charismatic. Consul General Claro Cristobal introduced her as a “woman of very many talents.” 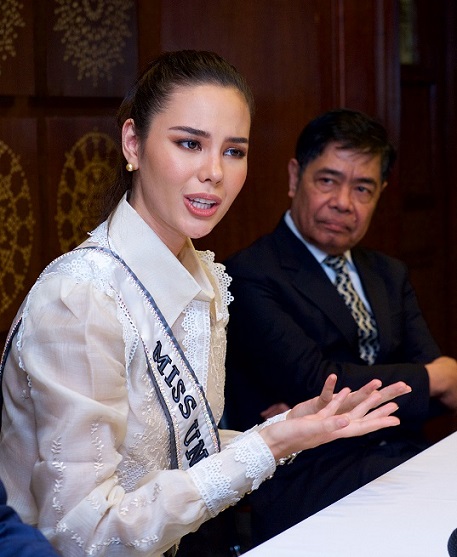 Indeed, for those who are not aware, Gray has a black belt in taekwondo and a Master’s Certificate in Music Theory from Berklee College of Music in Boston. She is a budding singer, and has recorded her first single to benefit charity organizations in the Philippines. She has a combined social media following of at least 5 million.

“Thank you everyone for being here today. I feel like I’ve taken a step back home to the Philippines seeing you all. I am a little bit homesick. It’s been a wonderful two months.”

With contagious enthusiasm, she fielded questions from the media.

You came fresh from the Superbowl. Could you share that experience with us?
CG: It was wonderful. It was my first taste of American sports, let alone the Superbowl, which is a huge deal here in the States. I actually was very surprised going into the NFL Honors and seeing how they not only focused on the players’ achievements but how they contributed back to their community. So, I came out of that event feeling very inspired.

What is your typical day in New York?
CG: It really depends. Now I’m going into New York Fashion Week, so it can consist of fittings, shows, going to events or meetings or even packing to go somewhere else. Being a Miss Universe you do have to be flexible and be on your feet 24/7. 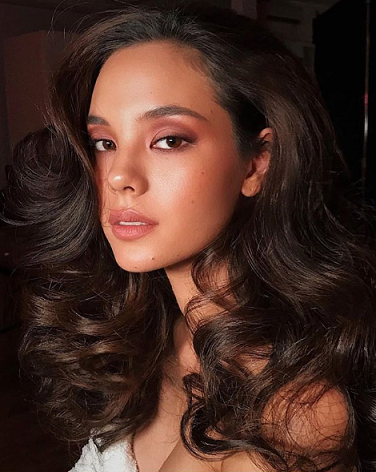 For little girls growing up in such a stigmatized society like Tondo, what is your message to them?
CG: Tell people or tell your parents what your dreams are, if you find that they will support you. That is such a big thing. And if not, you will find it along the way, people who will believe in you.

On HIV awareness as one of her priorities.
CG: Being a volunteer at Love Yourself Philippines, talking to volunteers and also having friends who have their own experiences, there is an incredible amount of fear around HIV/AIDS. We’ve stigmatized it so much, there’s so much fear attached to it. We have a lot of young people (or people of all ages) who are scared to get tested, scared to ask questions of a medical professional. Because of that fear, lots of people aren’t getting tested. As a Miss Universe that’s the one thing that I want to address.

Where do you see yourself in five years?
CG: I would love to have my own business, but with a livelihood program. I’ve really just had this love developed for our Filipino textiles as I’m wearing some today. I would love to be able to have a career in music, perhaps my own album that I’ve toured or be able to perform, and would have people sing back to me my own song. That would be fantastic.

I’m just curious about the training.
CG: I can’t say that it’s really the training that makes the girl, because you work with what you have. And I really feel like the girl is a big part of that. You could have my exact same team…you could have the best training in the world but if you don’t have that drive, you will never get to that stage. 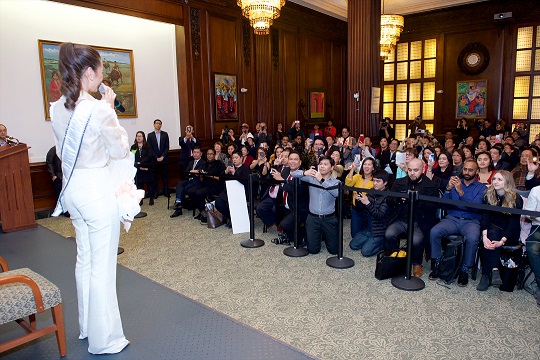 Has your perspective in life changed when you became Miss Universe?
CG: Definitely. I really make such an effort every step of the way to remain humble through it all because with this great success I always remember what I went through to get here.

You are from Bicol. I was wondering if you have been there and what is your impression of Bicol?
CG: I’ve been there only a handful of times po. I went there for the initial time with my mother. That was very sentimental for me. We drove by her primary school and the church where my lola used to bring them. I never had the opportunity to meet my grandparents on my mother’s side. I love the food.

Jeanilyn Ficarra, who traveled all the way from Philadelphia with her family, said, “Maganda, she’s outspoken and a good communicator.”

RN Joji Jalandoni, a community leader, said Gray is very pretty and has a very good platform. “She is into HIV advocacy in the Philippines. I think we can really relate to that as nurses.”

Gray will be going home to the Philippines in the middle of February for her grand homecoming celebration. Philippine media is reporting a grand parade in Makati on February 21 and a gathering with fans on February 23 at the Araneta Coliseum.